Mrs. Hattie Lee Peters Clark is probably one of the most outstanding black women to ever live in Randolph County, Alabama. She was the wife of the late Wilkie Clark.

Mrs. Clark, however, is probably best known, and more fondly remembered for her role as an educator in Randolph County, than with Clark Funeral Home. She was not one to spend a lot of her time at the funeral home, nor attending funerals. In fact, she found the funeral home atmosphere quite uncomfortable. But, because her husband was so steadfast in his love and respect for the profession, she was always there — in the background, quietly supporting in every way she could.

As a young woman, she found her niche in the field of elementary education. And with the passing years, she mastered this field, touching the lives of hundreds of youngsters, who attended the public schools in Randolph County, Alabama. 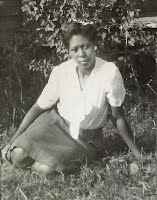 Her talents were many. She knew and loved music, however, never performed publicly. She was a gifted writer, and an excellent instructor. A firm disciplinarian with deep compassion for children, she was beloved by every student who sat under her.

There are those today, in their 40’s, 50’s, 60’s, 70’s and 80’s who remember her as a stern, but loving teacher, who always put her student’s interest in front of everything else. Her education career began in the 1940’s, after she graduated with honors from Alabama Normal Institute in Huntsville, Alabama. This was a 2-year teachers college for black teachers. This institution is now known as Alabama A & M University. 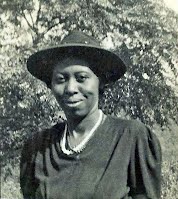 She married Wilkie Clark in 1948. And sometime after that, began teaching at what many of us remember as The Randolph County Training School. During her tenure there, she returned to school, this time to Alabama State University in Montgomery, where she earned her Bachelor’s Degree in Elementary Education.

It was at the Randolph County Training School, that she really made her mark and left her indelible imprint on the minds, and lives of the hundreds of black youngsters who metriculated through this grand institution.

As a member of the faculty there, she helped to shape the course of the school’s history, and helped set the tone for education for the generations of black children who attended school there.

During her years there, she demonstrated and exercised unsurpassed competence, earning the title of Coordinator of the Elementary Department during which time she mentored many a new teacher. She was such an astute teacher and leader, until her co-workers lovingly named her “Pres.”

As an educator, she demanded the best from her students. And in most cases, she got it. She was very adept at reading and language instruction, as well as other areas of instruction. Back then, black teachers took on a mountain of responsibility, teaching the children social skills, values, table manners, and all kinds of social graces. When the children left the elementary department, they were prepared, and ready for the world. 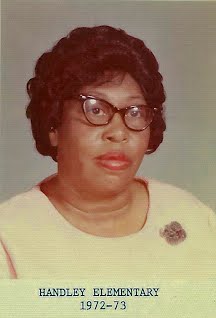 The 1970’s brought change in the form of integration in public schools, thus ended her tenure as the Coordinator of the Elementary Department.

Upon the closing of Randolph County Training School by a Federal Court Order, she penned the “farewell” exhortation to the school, which was published in the Randolph Leader.

Roanoke City Schools, compelled by a court order, reluctantly assigned her to Handley Middle School, where she was relegated to teaching in a down-stairs basement classroom, which she shared with long-time colleague, Mrs. Ruby Pinkston. This had to be a very demeaning experience for both of these proud women. But, with an unbelievable measure of both grace and dignity they endured this degrading treatment, and did their jobs the best they could under the discomforting racially biased climate that pervaded the education system in that day.

At the same time, her husband, Wilkie was venturing into the funeral home business, having opened Clark Funeral Home.

Her final years in Education were uneventful, and we dare say, quite disappointing, because integration put a damper on the former enthusiasm she had once had for education. Being black and having to relinquish her former place of importance in the domain of elementary education, being forced to share a classroom, and being placed out of her teaching field was the exhorbitant price many black teachers at that time, were forced to pay for integration.

After 36 years as one of Randolph County’s finest educators, she retired in 1974, due to health problems.

Though plagued with chronic health problems, her retirement was nevertheless active. She spent much of her time helping with budgeting for the funeral home, editing funeral programs, and assisting Wilkie Clark in every way possible, to make Clark Funeral Home a success.

Moreover aside from being Wilkie Clark’s “silent” but forceful business partner she continued to be a strong and vocal advocate for the education of African American students and their parents in Randolph County. For the more than 30-plus years that Wilkie Clark served as the President of Randolph County’s NAACP, she, too was right there, serving alongside him and exploiting the power of both her superior intellect as well as her pen, to be the voice of African American citizens throughout Randolph County.

From time to time, her fiery and opinionated “letters-to-the-editor” which appeared in the local newspaper, captured the attention of the majority powers that be, and not only drew them in, but changed hearts, minds, and influenced numerous advances for black citizens in the city of Roanoke, as well as throughout the county. 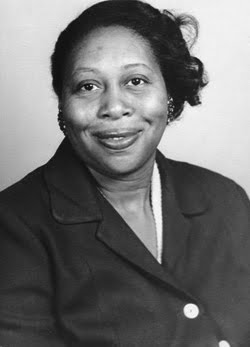