My life is but a weaving

Between the Lord and Me

He chooses all of the colors

Yet He works on steadily

But I, in blinded pride

Forget that He sees the upper

And I only the underside

The dark threads are as needful

In the Weaver’s skillful hands

As the threads of gold and silver are

In the pattern he has planned

Not til the looms are silent

And the shuttles cease to fly

Shall God unroll the fabric

And show the unknown why.

People are unreasonable; illogical and self-centered.

If you do good, people will accuse you of selfish ulterior motives.

If you are successful, you will win false friends and true enemies.

The good you do today will be forgotten tomorrow.

Honesty and frankness make you vulnerable

Be honest and frank anyway!

The biggest men with the biggest ideas can be shot down by the smallest minds.

Fight for some underdog anyway!

People really need help, but may attack you if you help them.

Give the world the best you have and you’ll get kicked in the teeth.

Give the world the best you’ve got anyway!

If there are any words that pay tribute to the life of Wilkie Clark, these are they. For these words are truly interpretive of his attitude toward life and death. We do believe that he strove to give the world the best he had — ANYWAY; for Wilkie Clark gave to the world HIMSELF. He gave to the world everything that God bestowed upon him — his love, his genuineness, his courage, his soul, his time, his resources, his compassionate heart. Because he was in our lives, we are better people for having encountered him. Because he has now been removed from our lives, we are stronger people because he has left for us his shining example of strength and courage.

His life story is a strangely moving collection of human experiences which made him the man he was. Among those experiences were the facts of his humble birth; his difficult childhood; his frightened young manhood; his time of decisiveness to either stand for something or fall for anything; his courageous and outstanding public service; his active and productive maturity; finally his time of crisis and grief; and his time to rest. While all the many eventful chapters in his story are filled with episodes of poverty, strife, struggle, racism, degradation, injustice, and racial disparity, there are also stories of triumph, success, courage, inner strength and victory.

Wilkie was a great warrior. His battles were notable. His enemies were poverty, injustice, mistreatment of the less-fortunate, segregation, and racial discrimination, and all of the other socio-political devices that threat man’s quest for life, liberty and the pursuit of happiness in what we like to think of as a democratic society.

By the mere fact of his blackness…he was all too aware that he was indeed the underdog. But he sedulously dedicated the better part of his life to seeking to assure that not only he himself… but that he along with all the others around him, would be assured to equal opportunities for betterment. Because he was here in the midst of the tumultuous times in this community, many great strides in civil rights were made…and perhaps accelerated. Because he lived, many of us have lived and will continue to live better lives.

On March 8, 1920, God delivered into the arms of Mr. and Mrs. Charlie Clark, and Louella Baker Clark, a fine boy, whom they named “Wilkie”. Wilkie was born in Carrollton, Carroll County, Georgia, the fourth of nine children. Even at birth, he was affected by the racial inequities of the time, for he was named for the white man his family sharecropped for, Wilikin King.

The family migrated to Randolph County, Alabama to the “Springfield” community, where they continued to sharecrop. Wilkie shared with all of us what hard times these were. The children in the family wen to grades 1-7 in a one-room shack at Wehadkee where they sat by a pot-bellied stove, while white children were bussed to town where they had access to much better surroundings. Still, he along with the others, had to work the fields at the Noel Foster place. After grade seven, young people had to travel into Roanoke to complete grades 8-12. Because they were in poverty, and dependent upon sharecropping as their livlihood, Wilkie could not go.

During these formative years, the Clark family joined the Hunter’s Chapel A.M.E. Church, where Wilkie obviously must have encountered the Lord, because at some point in time, he took courage — which comes from the Lord — and $1.20 and left Springfield to come to Roanoke, where he spent many years working for Dr. G.W. Bonner. At that time, he was proud to have the distinction of being known as “Dr. Bonner’s Boy.”

We who are closest to him believe that even at that time, God had to have been moving on the altar of his heart, because working for Dr. Bonner wasn’t good enough. He decided to venture out further. So, on May 9, 1942, he walked out on his faith, and was inducted into the United States Army. With a 7th grade education, he had nothing to offer. But, with persistence, and perseverance, he rose to the rank of Surgical Technician 3rd Grade. He serve3d a 3-year tour of active duty during World War II, in the medical Detatchment. During his military service, he received a number of impressive commendations and decorations. It was during his military tour of duty that he became acquainted with a growing organization known as the N.A.A.C.P. He joined this organization during the war, because black soldiers were giving their lives for this country, and returning home, to find second-class citizenship, and little or no opportunity.

At that time, he had no inkling that he would later answer another calling to be used an an instrument of the N.A.A.C.P. as a means of helping to bring about equal treatment of black citizens in Randolph County, and throughout the State of Alabama.

He returned to the United States with a new level of determination to become even better; to do bigger things in his life. It was his military connections which allowed him to finish high school as an adult, and receive a diploma from the Cobb Avenue High School in Anniston, Alabama.

Wilkie never forgot who he was, what he was, nor from whence he had come. Remembering his poverty-stricken childhood, and the woes of his devoted mother, who had to raise the children single-handedly after being left alone by her husband, he bought the family a home — the same home which has now been devastated by recent events.

He spent several years, working from place to place, in an effort to better himself, but never achieving satisfaction, but in 1946, he met a young teacher named Hattie Lee Peters, whom he fell in love with. After a loving courtship of two years, they were married on May 1, 1948. To their union, one child, a daughter, Charlotte was born. Together they became “soul-mates” for they entered into a dynamic partnership which would serve to bind them together eternally.

Hattie Lee, too was somehow deeply moved by the plight of black people. Having been born black, she, too, suffered many of the indignities that are all too familiar; therefore, upon marriage, they both struggled together… for the betterment of themselves, and for various individuals all over Roanoke and Randolph County. While Hattie Lee fought to break the chains of slavery through education, Wilkie engaged in fighting racism in all social institutions on all levels. At one point in time, he became so effective that we feel that it was truly his calling, because God watched over him down through the years when he could easily have been bombed, shot down, or lynched. At the same time, God anointed him with a fighting spirit, a winning attitude, and genuineness of purpose which drew others to him, a love for all humankind, a personable disposition, and respectability. Down through the years, he won many wonderful friends…. and made many many enemies as well.

During Wilkie’s 41 years with Hattie Lee, he continued to strive to improve upon his humble accomplishments. He worked for more than 17 years for the Atlantic Coast Line Railroad. But, that wasn’t good enough. His heart’s desire was to be an undertaker. In 1969, God enabled him to enter into partnership with his family, and to establish “Clark Service Funeral Parlor” later Clark Funeral Home, Incorporated. The business itself actually became a reality on February 18, 1970. Together, the Clark family has used this facility as a channel through which to touch people of all walks of life.

Wilkie was a “people-person.” Being a mortician put him right where he wanted to be — in touch. It allowed him to do just what he felt compelled to do — help others. In the between times, he derived immense joy in rendering high-quality, personalized funeral services to families all over Roanoke, Randolph County, and the surrounding areas. During the off-times, he was constantly submerged in concern for the community and it’s ills, and ways that he could help heal them.

Wilkie was a “good-friend.” not just to those whom we consider to be his closest friends… but to everybody. He could communicate with all people on all levels. He had a great gift for being able to show compassion to anybody, no matter how great or how mediocre. He personally assisted many individuals, for many reasons…. some showed appreciation….some used and abused his kindness, some were indifferent. Nevertheless, this was his quest. God blessed him with great wisdom. Many would come from near and far to seek it.

Wilkie was a Christian. He was a zealous member of the Bethel United Methodist Church for most of his adult life. He was not a religious fanatic…but he has left a long list of works behind him, that speak for him. There is no doubt in our minds that he was a spirit-filled human being, who, just like Jesus, went about doing good. His record of service in his church is an admirable one.

On February 23, 1989, we lost Hattie Lee. We were devastated. he was devastated…probably more deeply than any of us will ever know. Before we were able to resolve that loss, God chose to move in our lives again. During the hours between late Friday evening and early Saturday morning, July 28 and 29, God decided that it was time for Wilkie to take his rest….a well deserved rest. He met a tragic death by fire that we shall never understand nor forget. But it is written “For we know that if our earthly house of this tabernacle be dissolved, we have another building, an house of God, not made by hands, eternal in the heavens.” (II Corinthians 5:1). 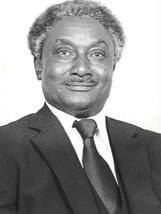